The History of Worcester Valves

The History of Worcester Valve Company

In 1955 Dwight D Eisenhower was POTUS, Winston Churchill had his last 4 months as Prime Minister of Great Britain, “The Dam Busters” appeared in British Cinemas for the first time, and a 30 year old Sales Engineer, who had only been working for a small New Hampshire valve company for three years, got together with Homer McNut to buy out his employer at “The Worcester Forged Steel Valve Company”. 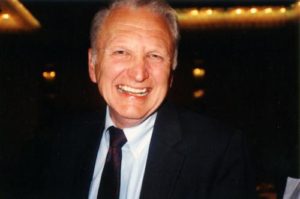 Robert C McCray and his new partner quickly made giant strides in the burgeoning world of valves, shortening the company name to the “Worcester Valve Company” and, after just one year, introducing a new “three piece design” ball valve – which would become one of the most copied innovations in the industry.

The ambitious McCray had graduated with a Bachelor’s Degree in Aeronautical Engineering. He studied during and after his commission as an Ensign in the US Navy Supply Corps. McCray joined the company straight after graduation.

Lew Norris, the British Engineer and Designer who helped design the record breaking high speed Bluebird boats and cars, in which Donald Campbell broke post-war water and land speed records, met with McCray and McNut in 1959. A meeting that resulted in the formation of “Worcester Valve Company UK”.

Norris was already famous within engineering circles along with his brother Ken.

They had set up their own Engineering Design Consultancy in 1952. Shortly after which – at a New Year’s Eve Party the same year – Donald Campbell said

“Now that you’re together, how about designing me a boat?”

Their company was one of the most innovative and diverse of its kind – inventing the automatic seat belt and producing an early go-kart.

The synergy between McCray and Lew Norris was to produce a stroke of genius. Lew knew that purely designing things (in those days) would never make them much money, so while Ken 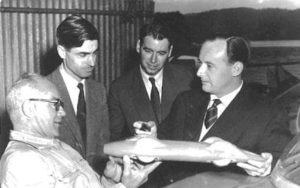 concentrated on design Lew turned his attention to manufacturing.

McCray and McNutt’s 3 part Worcester ball valve became a joint venture. Norris and his team developed a control system for it, which was then licenced back to Worcester in America.

The “Worcester Valve Company UK” became an immediate success. They took business from traditional gate and plug cocks, as well as much larger competitors.

In 1964, Robert McCray bought out Homer McNut’s share of the business. He changed the name again, this time to “Worcester Controls Corporation”. They expanded the business globally through South America, Europe and The Middle East – with Lew Norris as vice-president.

Worcester’s range of valves expanded, a lot of those designs still being available through Valve and Process Solutions today, but Worcester had already consolidated its position. By the 1970s the Company was bought by BTR Plc. Impressed by the ease in which Worcester scaled up and modernised manufacturing, they went on to buy other respected valve companies including Audco and Argus. 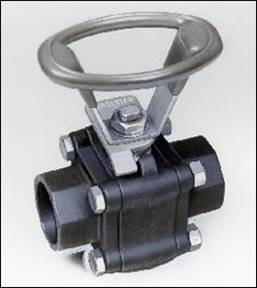 An early Worcester design of the 3 piece ball valve. It was so good it hasn’t changed much in all these years

Ex-Ensign McCray went on to be a board member of 6 publicly held companies. He received several professional awards, including Entrepreneur of the Year and Life Achievement Award.

He was still active; encouraging and mentoring young entrepreneurs, before he passed away aged 90 in August 2016.

Hi-Speed Visionary Engineer Lew Norris and his brother Ken carried on innovating after being bought out of Worcester.

His prediction of a good income to be made from manufacturing was proved to be true. At Worcester, he developed and patented the Flotronic Pump. He did this while also developing other companies that designed and produced spool valves, packaging machinery, lift trucks and explosion-proof boxes.

Despite their major contribution to British Engineering, the Norris brothers were never honoured by their country.