Rugby-mad Alison keeps our spreadsheets away from the sin-bin 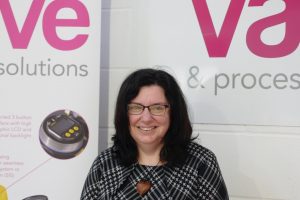 Alison Holleworth is VPS’ Accounts Manager and May 2019 will mark her 3-year anniversary here.

Initially working three mornings each week, Alison’s role has expanded and she is now in the VPS office daily from 8am to 4pm to give us rugby updates (and to deal with all the accounting requirements brought by our considerable growth).

She also runs her own business with husband Shawn, Chesterfield Garage Equipment – which takes care of evenings and weekends! And on top of all that, Alison has been studying for AAT (The Association of Accounting Technicians) qualifications.

“I’ve now completed level 3,” says Alison, “and I love doing it. Steve’s been supporting my qualifications all the way through.”

Sheffield-born Alison began her career at HSBC before taking up a role in a solicitors’ accounts department. She and Shawn had run thriving Chesterfield Garage Equipment for 10 years when Alison joined VPS.

“Coming back into an office environment after 10 years on my own was a bit strange at first,” says Alison, “but I love it here. VPS is a transparent and open place to work – with daily updates and targets, everyone is clear on where we are.”

A season-ticket holder for Leicester Tigers Rugby Club for a decade, Alison says “if I’m not watching a rugby game at the weekend then there’s something wrong. I’m obsessed. Shawn and I get to Tigers’ home and away games; we’ve been to Twickenham – and as my brother lives in New Zealand we’ve seen the All Blacks play a few times too.”

Alison has been treasurer of the Chesterfield Panthers Rugby Club too, “I did that voluntarily for two years and secured the team’s shirt sponsor. It took over my life but I do love my rugby. I love the atmosphere at a match, the friendly banter with other supporters over a pint, the Tigers’ supporters evenings where my favourite player is on our table, listening to the referee’s microphone during a game – it’s all fantastic.”

It all started when Alison’s son Patrick was 10 and asked if he could play rugby. He’s now 23 and a PE Technician at a local secondary school; daughter Theresa, 19, is soon starting a career in the skies as an airline cabin crew team member.

Alison’s accountancy expertise and bookkeeping brilliance ensure our spreadsheets and systems don’t get sin-binned. But while she loves her VPS team-mates, she would like to award them one penalty: “nobody else talks rugby in here.”