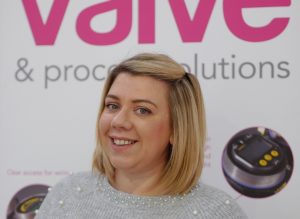 After spending the last decade in the gas meter distribution industry, Lou’s role marked her return to valves and actuators – and a reunion with some colleagues she worked with over ten years ago including MD Steve Pearson. What’s it like coming back to our industry?

“Brilliant,” she says, “it’s really, really good. It’s nice to be part of a small and growing team, everyone chips in and pulls together.

“To see the company go from strength to strength and to be part of that and know you have contributed to it is a great feeling. There have been massive changes just in the 8 months I have been here, new systems, a new unit – it’s fabulous.”

Outside of work Lou is a qualified nail technician and does lots of nails for friends and family.

“I love spending time with my husband Martin and my dog,” she says. If you’re really lucky – and ask nicely – Lou will show you an unusual portrait of her much-loved dog, 3-year-old Lola, a pug and jack russell cross.

Lou’s other interests include films, “and I have a massive love for 1980s music,” she says.

What kind of eighties music, Lou?

“It’s quite eclectic, anything from Bowie to Bananarama. My friends take the mickey out of me, they won’t let me put my playlists on when we have a gathering.”

Sounds like we’ve been forewarned of the consequences if Lou gets the chance to compile any office party playlists!

Previous Post Podcast episode 2: how to prolong the lifespan of your valves
Next Post VPS is an 'Approved Supplier' of Aflex Hose