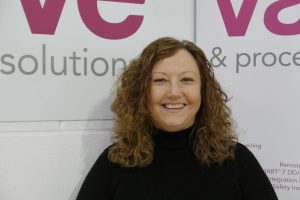 VPS’s Operations Manager Dawn Brown is known by her colleagues for saying it how it is, her determination and diligence if she’s researching something she wants to do – and her undying love of spreadsheets.

Dawn is also exceptionally good at jigsaws. We’re not talking about the fiddly type of puzzles in which you spend an hour assembling a picture before finding there’s a crucial piece missing. No, Dawn’s been leading VPS’ implementation of our new SAP system.

A VPS stalwart, when Dawn joined the business in 2012 she became employee number 3 along with MD Steve and another old colleague Ken Woolsey. She had originally met Steve when they both worked at Pegler and Louden, where Dawn’s 20 year tenure began in credit control before she moved to day-to-day sales, project and contract work.

In Dawn’s seven years at VPS her role has certainly evolved “drastically,” she says. A typical week now may include processing orders, implementing SAP and developing new procedures as our business develops. Our growth over the past 18 months means “life’s turned on its head and I’ve loved it,” she says, “it’s so exciting, you don’t know what each day will bring.”

Outside of work Dawn, who lives in Hucknall with “husband” Stuart and daughter Amy, loves family adventures. Supporting the 1803 Hucknall Squadron Air Cadets takes up plenty of her time, including organising numerous fundraising events. The Air Cadets, she says, give young people fantastic opportunities to go on an amazing number of camps at RAF bases and overseas and even to fly.

And Dawn knows a thing or two about soaring high: “VPS is breaking records left, right and centre, it’s awesome” she says. “and I’m learning all the time, which is great fun. With SAP, procedures, sales and projects it’s like a big jigsaw. It’s hectic, it’s varied and it’s great fun.”

Previous Post Podcast: How a valve industry qualification could boost your career or business
Next Post Two awards in the bag for team VPS